Science carries a certain amount of mystique. The lab coat seems the cloak of a secret society operating just out of reach of the layman’s understanding—not quite magic, but certainly not mundane.

Pull back the curtain and you’ll find science is much less clandestine than you might imagine. In fact, USANA’s in-house team of scientists is just working hard trying to produce the best science-based products available.

That’s not to say there aren’t things USANA’s research and development (R&D) team wants to keep under wraps. Some of the information—tucked away in the unremarkable piles of paper around Brian Dixon’s office—might be the next big thing in nutritional science. As USANA’s director of product innovation, it’s Dixon’s job to turn those piles of scientific literature and USANA’s 27 studies into the next game-changing product or upgrade.

Transforming information into effective products isn’t easy, so you’ll have to forgive Dixon and his colleagues for keeping some secrets. Especially when those secrets turn into patented technologies and products.

From Page to Test Tube

What starts in stapled stacks on the desks of USANA’s third floor transforms into something that rattles inside bottles that end up on so many kitchen counters through a process more work than wonder and more moxie than magic.

It starts in the pages of the scientific literature that make up a roadmap of sorts. They don’t predict the future, but the literature does indicate the direction science is heading, knowledge that’s essential to staying on the cutting edge.

With scientists from so many different backgrounds constantly studying diverse areas of the literature, USANA covers a lot of ground. The R&D staff contains a doctor of naturopathy, an expert in sports science, molecular and cellular biologists, nutritional biochemists, pharmacists, nurses, biologists, and chemists. Since all of the members of the R&D team focus on different areas and approach problems from different points of view, they create a huge, robust way of looking at things, which is important.

When the team finds something of interest in the journals, they are able to run with it. Depending on the type of finding, they will either design an in-house study, or consult the experts at research partners like the Linus Pauling Institute (LPI) or The Orthopedic Specialty Hospital (TOSH). Research partners are currently working on 22 of USANA’s studies.

“We yield to the experts whenever we need to, which I think is smart,” Dixon said. “It’s working smarter, not harder.”

A good example of the role USANA’s scientists play in external research is a recent study about bioflavonoids. The R&D team found a paper that suggested bioflavonoids could blunt a spike in blood glucose. They asked a postdoctoral researcher at LPI if the findings had any validity. She looked into it and said the bioflavonoids in USANA’s line theoretically should have the same effects found in the paper.

Knowing LPI had more expertise in the area, USANA had them take the lead on the study. The project found itself in a time crunch, so Dixon and another USANA scientist went to LPI to work side by side at the lab bench with the postdoctoral researcher. Their findings were recently submitted for publication.

Although USANA will defer to the experts they partner with, the company’s R&D team contributes its own expertise to external research. “USANA brings speed, efficiency, and passion to any project we’re involved in,” Dixon said. The in-house team also has an experienced, hard-working, well-qualified human clinical research and analytics team, and top-notch facilities available on-site.

“We’re working with a group of physicists and chemists at the University of Utah,” Dixon said. “They don’t have much human clinical experience, so they can develop technologies, and we can test them in human beings. We’re combining efforts for the greater good.”

The Basics of Applied Science 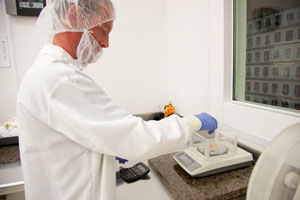 Expertise isn’t the only consideration when deciding if a study should be handled in-house. USANA prefers to do applied research—applying basic research done by institutions to humans, and using it to develop or improve products.

“We’ll do basic research when we think it could pretty quickly dovetail into applied,” Dixon said. “But we like working as closely with the human, with our customers, as possible.”

Basic research isn’t always so basic. It explores the mechanisms of a phenomenon, and establishes the scientific understanding needed to apply groundbreaking research to the human condition. So USANA’s research partners are out looking for next greatest thing in nutritional science, and in-house experts leverage that basic research and apply those cutting-edge techniques and technologies directly to human health.

Translational research is the term Dixon uses. And there’s plenty of it going on in-house at USANA. There are currently five human clinical studies in different stages that Dixon said should be finished this year—an impressive number, to be sure.

The first study is an effort to find a medical device that can quickly show USANA’s products are yielding real health benefits. From research they’ve done, the R&D team knows antioxidant status is increased after taking the USANA® Essentials™, but that increased status doesn’t feel or look like anything. The study, which is in the process of data analysis, looked at five different medical devices to assess their ability to measure biomarkers that can show the health benefit of taking USANA products.

Another study examines whether the phytosome technology used to raise the bioavailability of the turmeric extract in USANA’s upgraded Procosa® can be used with other core ingredients. Phytosome technology uses healthy fats to encase nutrients to protect them through digestion and deliver them more effectively to the cells. They are currently investigating if this can help different nutrients and antioxidants get into the blood and the cell, increasing their effectiveness.*

USANA was one of the first supplement companies to put advanced doses of vitamin D in its core products. “We didn’t stop there,” Dixon said. “USANA being USANA, we wanted to actually prove that our customers were experiencing a real benefit. So what we did is conduct a study.”

Actually, two studies. Both are about vitamin D status in USANA product users, and are currently being written up. The R&D team, with the help of Associates, found 500 people, half who used USANA products containing vitamin D, and half who didn’t. One study measured the vitamin D status of participants at the end of winter, when levels should be at their lowest. The other measured levels at the end of summer, when participants should have the most vitamin D.

The winter study found that those taking USANA products, on average, had a 47-percent higher vitamin D level than those who were not taking USANA products. The summer study yielded almost the exact same results, which is odd because a person’s body can typically make tens of thousands of International Units (IU) of vitamin D in about 20 minutes of moderate sun exposure. But contribution from the sun only equated to study participants taking a supplement with 300 IUs, which results in a negligible amount of vitamin D in the blood.

Dixon and the team attributed the results to a modern lifestyle that doesn’t allow for enough sun exposure during peak times between 10 a.m. and 3 p.m. This is especially true for people who live above 37 degrees north latitude or below 37 degrees south latitude—where the tilt of the earth causes much of the essential UVB radiation from the sun to be filtered out by the planet’s atmosphere. 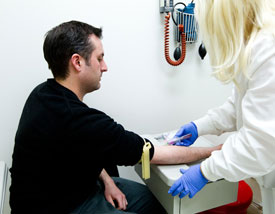 The data suggests people shouldn’t just be worried about vitamin D status in the winter, Dixon said. To achieve optimal levels, they should be supplementing with vitamin D all year.

The final in-house study is shrouded in some mystery. It involves a possible discovery that could impact USANA’s products and their effectiveness. All Dixon would say was that it’s a technology that could keep antioxidant levels in the blood higher for a longer period of time, providing more protection against oxidative stress. After further study, USANA is hoping to file patents.

The conclusion of a study doesn’t mean the end of the work. Researchers write papers for presentation at scientific conferences or to submit for publication in scientific journals—just like their peers at major research institutions. The peer-review process the research goes through means studies are evaluated by experts, who check the papers’ scientific validity.

“We’re still held to the same standards of scientific excellence that any university or research institution is,” Dixon said.

Including papers that come out of research collaborations, Dixon said USANA scientists have about 10 papers published a year. Publications are a good metric for evaluating researchers, and almost one a month is an output even larger labs would love to have.

Getting journal articles published raise the credibility of USANA’s research, but the ultimate goal for any study is to make better, more effective products. It’s long, less-than-magical work taking science and turning it into something to keep the USANA family—and the world—as healthy as possible. But it’s totally worth it.

Go back and read all the Scientific Method articles, and learn about all the research going on at USANA and its partner institutions.

USANA Health Sciences, Inc. (“USANA”) of 3838 West Parkway Boulevard, Salt Lake City, Utah 84120 USA is the promoter of this trading scheme in the United Kingdom. The goods which are sold under this scheme are nutritional supplements, body care and related products produced or supplied by USANA and any other suh goods or services as USANA may market from time to time.It is illegal for a promoter or a participant in a trading scheme to persuade anyone to make a payment by promising benefits from getting others to join the scheme. Do not be misled by claims that high earnings are easily achieved.

PrevPreviousProtect Yourself with Proper Skin Care
NextAre you managing to balance your dreams with your responsibilities?Next

How do you define your wellbeing?  Where does it start

As I was listening to the news, I felt that

Hayley Bennett Wellbeing is a wellbeing coach and will do

The Change Cycle – make lasting changes in your life

Are you looking to make some changes in your life?

Special guest blog by Rachel Lawes from the Health Hub,

Thank you for signing up.

We use cookies on our website to give you the most relevant experience by remembering your preferences and repeat visits. By clicking “Accept All”, you consent to the use of ALL the cookies. However, you may visit "Cookie Settings" to provide a controlled consent.
Cookie SettingsAccept All
Manage consent

This website uses cookies to improve your experience while you navigate through the website. Out of these, the cookies that are categorized as necessary are stored on your browser as they are essential for the working of basic functionalities of the website. We also use third-party cookies that help us analyze and understand how you use this website. These cookies will be stored in your browser only with your consent. You also have the option to opt-out of these cookies. But opting out of some of these cookies may affect your browsing experience.
Necessary Always Enabled
Necessary cookies are absolutely essential for the website to function properly. These cookies ensure basic functionalities and security features of the website, anonymously.
Functional
Functional cookies help to perform certain functionalities like sharing the content of the website on social media platforms, collect feedbacks, and other third-party features.
Performance
Performance cookies are used to understand and analyze the key performance indexes of the website which helps in delivering a better user experience for the visitors.
Analytics
Analytical cookies are used to understand how visitors interact with the website. These cookies help provide information on metrics the number of visitors, bounce rate, traffic source, etc.
Advertisement
Advertisement cookies are used to provide visitors with relevant ads and marketing campaigns. These cookies track visitors across websites and collect information to provide customized ads.
Others
Other uncategorized cookies are those that are being analyzed and have not been classified into a category as yet.
SAVE & ACCEPT
Powered by